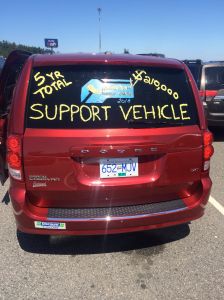 This past weekend was The Ride to Conquer Cancer event that I have participated in now for five years in a row. The Ride is an amazing event that does so much for the BC cancer Foundation.  It's the largest fundraiser of the year and this year was no exception. 9.1 million dollars was raised by 2106 riders over the course of the 2013-2014 year. Absolutely fantastic!

Rain or shine we ride for over 250km in two days. But let me make something perfectly clear. When I say we ride 'Rain or Shine' I think I should really say we ride Rain or Rain :) See, having done this event for 5 years now I can tell you that there is an 80% chance that we will ride in the rain as 4 out of 5 rides for me have in fact been...well...in the rain. This isn't some made up fact like 4 out of 5 dentists prefer this toothpaste etc. This is now a hard core fact that 4 out of 5 rides were in the rain. So if I were to be asked right now what are the chances of it raining next year I could say, without a shadow of a doubt, "Probably". But on a very positive note the ride next year is going to be moved to August. I think the organization may have figured out that maybe we don't want to ride in the rain anymore...but I digress.

Really the weather is a mute point. I don't care about the rain. My team doesn't care. The 2106 riders don't care! We are all there to show our support for the BC Cancer Foundation and for the Ride to Conquer Cancer.

As to fundraising, my team this year, Nanaimo Rides Again, was fairly small but we still managed to raise over $20,000 for a 5 yr total of $210,000! I can't thank my team enough for their fundraising efforts. It's been an amazing 5 years and the coming together of like minded people has really brought us all together in so many ways. 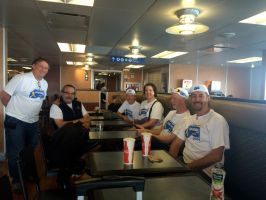 The coolest thing about this year's event was that my buddy Steve Fagan brought his drone to get some aerial footage of the ride. The video I put together with his footage is below. It really shows the ride in a whole new way and gives you a sense of what it is like to participate in this event.

For more information or if you'd like to join our team you can contact me at info@nanaimoridesagain.com