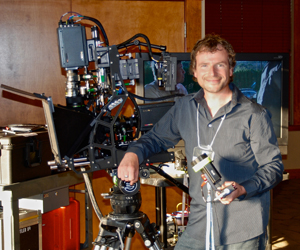 Frederic Robinson has worked in film and television for over 17 years.  Having a wide range of experience in so many areas of the industry has given Frederic a unique eye for creating visually compelling stories in the form of television shows, music videos, films and corporate videos. Past projects have included numerous Reality TV pilots.  Highlights include: Flowers in the Family, Property Junkie - licensed through e one Entertainment and actingclass.ca - starring Cory Monteith and Hayley Sales.  He has also Directed, shot and edited 3 episodes of Success by Design, 2 full seasons of Designing Spaces, and works as a shooter for Chek TV's news show 'Senior Living'.  Editing credits have included the film trailer for 'Sam's Lake', a feature film produced by Maverick Films in Los Angeles, and the film trailer to 'God's in White', an American medical documentary by an independent L.A. based producer. In the past two years, Frederic has been the director, director of photography, and editor for 11 music videos for two time Juno nominated kids band 'The Kerplunks' for their compilation DVD 'Get Creative' which won the Silver Parents Choice Award in June of 2012. 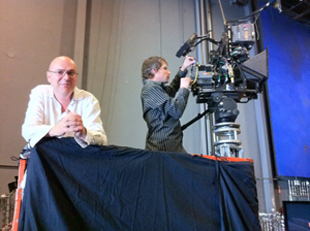 As a Director, Producer, Shooter and Editor Frederic has been involved in some amazing projects and has had the pleasure of working with some amazing people including Alan Bishop (Challenge Producer for Survivor and Canada's Smartest Person), Gavin Wilding, and Dean Yurke (The Avengers, Super 8, Avatar) .  Frederic was also the Producer of the short film 'gone.' which gained international attention at the Cannes Film Festival.  It starred himself and the late Cory Monteith.

The secret to his success.  "It's like building a house.  You can't build a good home without a strong foundation.  The same is true for any film or video project to work.  There has to be a solid story that can be told and told well. I'm more interested in story telling than special effects because at the end of the day it's a great story that engages the viewer and allows them to escape into the magical world you create for them."

With so many great opportunities over the last 17 years, Frederic's drive and constant pursuit of his own personal best have given him the eyes and experience to continually strive to produce high quality productions.  In October 2012, Frederic launched a new brand of his business, CMEFIRST, specifically designed for businesses.

"a CMEFIRST video gives you the power to share your story with the world and acts as a pre-qualifying marketing tool to ensure you're reaching the customers you would live to do business with.  We tend to work with people we know, like and trust.  A CMEFIRST video gives you the opportunity to create that bond in under 2.5 minutes!  Your story is important to me, and it's important to the customers you are trying to reach"
Frederic Robinson

Here is a partial list of Frederic Robinson's acting and on-camera personality credits.