As many of my friends know this weekend will mark the 5th year that I have participated in The Ride to Conquer Cancer. Back in 2010 I was introduced to this event from an ad that was running on TV.  I decided that I wanted to do it so I went to an orientation meeting that was being held at Beban Park.  Little did I know that that night would be a very pivotal moment in my future and the start of an amazing journey of discovery for myself. 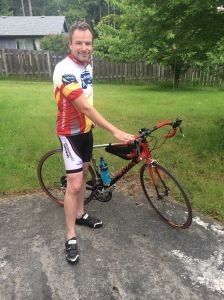 Back in 2006 my mom past away from Cancer.  It was a shock to us all as my mom was a really healthy person overall so this diagnosis just didn't make any sense at all.  But life doesn't make sense sometimes and somehow you just have to take all the bad with the good as much as you can.  But here's the thing.  From that point on I started trying to figure out what on earth could have done this to her.  I started researching everything.  Environment, food, exercise etc. and what I found out was completely eye opening and much of the cause really does have to do with diet.  I could go on and on about diet but I think I'll save that for another time.  If you want to know more let me know and I'll write something about it :)

Anyway, as a result of all the research I did I knew that I wanted to do something.  And when I found out about the ride...you know what happened.

So why was it a pivotal moment? It was pivotal because it started a whole chain of events that have lead to this moment.  This moment where my team and I have managed to raise over $206,000 in 5 years!!

That night at the orientation I ended up meeting Luc Begin and Ian Drown.  Luc, turns out, was a high school math teacher who unbeknownst to me at the time was one of the very teachers that walked the halls when I was at NDSS. Anyway, the three of us decided that instead of training by ourselves it would be easier to try and fundraise together.  I have to admit that trying to fundraise on my own seemed like a hard venture.  The most I had ever raised before was $500 for the Relay for Life so trying to raise $2500, each, to participate in The Ride to Conquer Cancer seemed like an impossibility to me on my own.  Nanaimo Rides Again was born.  Instead of just participating for one year, it became 2 and 2 became 3, and 3 became 4, until I realized that we had created a monster! lol  I have made some amazing friends on this adventure and we know that we are making a difference in people's lives.

One of the things that I always want people to understand is that the money we raise all goes to The BC Cancer Foundation and not just towards research.   Our team has it arranged so that all the money we raise goes to Victoria as well. Our motto is "From the Island, For the Island"  Anyway, our team had a great opportunity to have a tour of the facility in Victoria and not only did we see the great work that the researchers are working on but we also saw first hand where a large portion of the money we raise goes towards.  Specifically equipment, staff, nurses and other items to make sure that people who are dealing with this disease are made as comfortable as possible.  I'm very thankful for the The BC Cancer Foundation and for what they do for the people inflicted with this horrible disease.  I firmly believe that we will not only find a cure for Cancer but we will eradicate it in my lifetime.